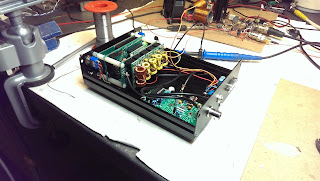 The 5W PA could not reach 5W level  at the higher bands.
With the PA  inside the case using the bottom of case as heatsink is effective 20W DC input it stays cool.
But i had some self oscillation issues and unwanted reboot at TX start.
No short thin coax but a twisted wire connection between U3S and the LPF unit resulted in more output.
A single BS170 reached 700mW at 5V 28MHz and 600mW at 50MHz
With this drive level it should be easy to reach   5W with the PA if the power gain was 10dB
but is is not.

Important is reading excellent manual and application notes before starting  contructing
That I did not good enough. 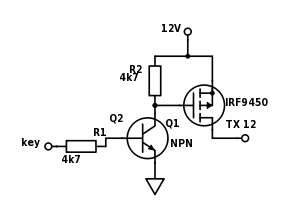 3 Extra   2 x 100nF over the 5V  and  +V to ground to prevent unwanted  rebooting  RFI backfeed
That helped  no reboots at TX switch on but still display garbage at TX 28MHz  can't find the hot spot
the effect is worse with closed case.
Black coating at the contact point of screws removed but did not solve the 28MHz display jamming.
The display is not needed during operation we have to live with it.

4  T1 should have less windings for use at the high bands but how many less exact i do not know and i can't find that note back. To get a better balance between 6m and 160m power out  i ty to find someone who already found a  value
With the default 10 windings  4W @ 10m 3W @ 6m  at 13.5V
the lower bands have almost too much  160m 12W  80m 10W  30m 6W
Already  spend too much  time experimenting  my other projects and jobs  need some time too.
I will not change unless I know exact how to do it now.

5  The original 27 crystal is drifting too much, trying to stabilize did not work for me.
I wonder why a penny x-tal at this key position??
A also cheap DIL oscillator would give far better result.
The FOX TCXO  does discrete frequency corrections that interfere with WSPR
WSPR  above 10m is resulting in a lot of lost decodes.
6 In some boot cases the U3S did not synchronize time while the GPS data is present and the hartbeat is blinking.
7 The single BS170 at 5V output is 700mW @ 28MHz   600mW @ 50MHz
an extra BS170 did not improve output but rather a bit lower.
But when i used a pair of twisted wires  from a CAT 5 UTP cable the output improved from 300mW to        700MW  @28MHz !  I did not try 2 BS170 parallel in this situation
I think 700mW  stable out and no noticeable heating of the BS170 is a remarkable high output for the          U3S  with a single BS170
I have seen 1W at 12V but then the BS170 gets hot. 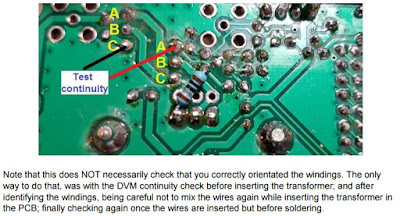 Al together constructing the U3S kit is an interesting learning project.
Not easy plug and play there are many options and application notes.
5W  on the high 12 10 and 6 is not reached yet.
I assumed that 5W out at 10m at 12V would be no issue.
The low bands 160  80 30m  are fine almost too high output and 0 drift reports
I will have to modify T1 to equalize the output over the range 160 to 6m
T1 is 10 wdg i could make it 8 the inductance will drop from 44 to 28uH 112u  252u
Somewhere in the documentation is a note about reducing the 10 windings for T1
But i can't find it back

bad luck?
2 Si5351a units are defect  1 came with the Progrock  one day it would not pass the boot test
the 2nd was damaged by a faulty 5V power supply on my bread board in test.
Si5351a outputs are vulnerable they need ESD protection if used external.
Plugging the Si5351a on the Progrock is a quick way to test it.
If okay the LED led will blink short at boot and stay off.
The LED stays on when no or a defective Si board is plugged in.
But sudden that red led would not lit anymore...after  5V switching in and out to see the response
now I lost the Progrock also  :(  no ESD  it just died.


The FOX924-27 TCXO is not suited as PLL reference
For lower frequencies  below 28MHz it is "good enough"
Not usable at 50 and 144.489 MHz for WSPR resulting in very poor decoding of the signal.
Why use the cheapest computer crystal as base for a PLL that should generate high frequency stable modes like WSPR i do not understand.
Why not a  DIL 27MHz oscillator?
Anything is better then a discrete X-tal that needs the chiposcillator circuit.
I use a standard 2€  42MHz  DIL oscillator in my 70MHz XVTR almost no drift WSPR mode.
During the WSPR tx frame the drift is corrected with discrete frequency jumps in my case about 6Hz
I see the TCXO moves within the +  / - 2.5 ppm  s it looks this is total sh...t
I had no idea that TCXO's could behave like this
Else obviously I would have searched an other brand TCXO possible Tattien?
I should have informed me at the user groups.
I see some other om's report issues with this FOX-924-27
The average freq is accurate..
The CAL correction can be set to 0 = no correction
If non zero it corrects to 27.000.006  6 Hertz  no issue
Between TX frames the U3S is idle but the Si5351A signal still leaks  as  not modulated carrier
A straight small trace on the WSPR waterfall but some irregularities i.e. some frequency steps are visible  these must be originated in the TCXO it self i think.
The frequency stability is poor with the FOX not Fox like this Fox more old jumpy

The 1150Mhz  PLL  i got from DF9NP is clear and  stable. Excellent stand alone without GPS Ref.
Dieter uses Tatien 10MHz TCXO 's  they do'nt jump around

The Ultimate with a good TCXO and a working PA that is my simple goal.... 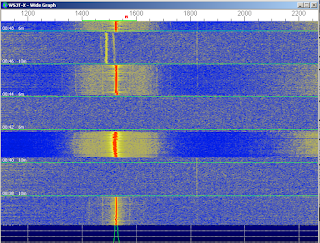 
50MHz sometimes does not decode because of the WSPR interfering TCXO jumps that produce about the same 1.5Hz frequency shifts as WSPR does
at 144MHz things are worse and a good decoding is rare

Extended call sign like PA0O/1  does freeze my WSJT-x  and WSPR v2.21 programs if i monitor my own WSPR signal but other ham do decode it  a bit odd.


older story's
Now trying to ad the small QRP LABS 5W PA
The goal  5W rf on 12, 10 and 6m
Using  Misubishi RD15HVF1  expect to have more output at higher HF bands.
( and more self oscillation ... needs a 10 OHm and ferrit bead at the gate)
I knew this FET from K3  10W LPA  i had to replace a broken RD15HVF1 2 times in the
10 years of use  must say.
By soldering the Power FET to the under side of the PCB  the RD15 cool tap = source  so it can be screwed direct to the bottom plate... should be.
Using the Ultimate case as heath-sink seems an efficient way to keep most heath outside .

The PA power is not switched off during idle time i do not want to keep the PA powered in idle state.
Since then RF and noise is leaking out at idle time  possible  interfering with other receivers .
Luckily there is the  Key signal active 5V during TX
The aux option to activate  d4,5,6,7 are active in tx and rx state per band.

About halve of the PA PCB is used for a special envelope shaping power modulator  to avoid key clicks for on off keyed modulations i.e. CW
You will be a gentle ham in CW with a smooth signal utilizing micro controller shaped  raised cosine envelope system.
This is an interesting system a bit similar with SDR pre-distortion to increase signal quality.
The  circuit uses standard parts  but it makes the PA complicated and is not needed for FSK  modes like WSPR. 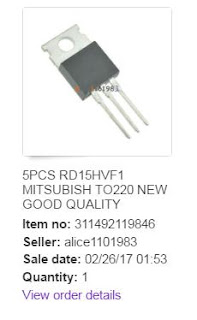 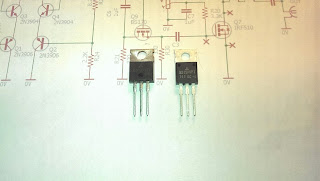 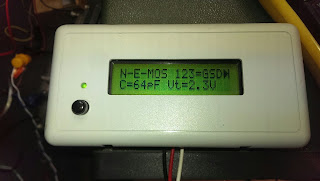 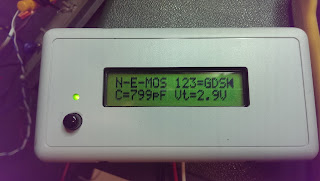 
meanwhile
474.2 kHz WSPR  DX seems over and out no TA decodes seen last 3 nights
6m ES season is starting a bit but since the SOLAR  EDGE is generating10-20 dB noise in my once
quiet radio environment the fun is gone
I guess in my turn i can build antenna masts and high power PA's without asking just as i please


jet my other project:
the 1296MHz transverter 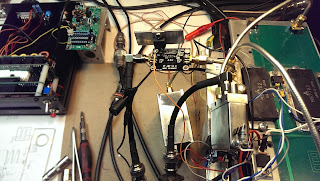 
And the receiver is frequency stable after about 10-20 m warming up  it drift about 100Hz up from cold start. and then is stable within few Herz  as the WSPR-x waterfall shows straight traces.

Tested the SPF5189z Ebay preamp this is a very good PCB design.
Huge gain!  146MHz  i.f. noise level raised from S1 to S5 with this 1296M preamp.
That means i can use 30m simple RG58 up to the unit near the antenna  hope to get it up soon.
A concern is the 3rd ip  or IMD that will not improve with the high 1296MHz gain.
This preamp seems unconditional stable no oscillations with unterminated input.
But it draws 160mA at  3.45V !  the chip / PCB  warms up strong with 5V supply.
I lowered to 3.45 with 2 Si diodes
The current should be around 100mA at 5V but i measure over 200mA
I thought it was was broken  the UA78L05 seemed to be shorted.
I have 5 replace SPF5189z from Ebay  but they seem okay i have one of them in use now
Original was removed unnecessary this seems normal for these devices the new one measured same.
It need high current supply a cooled UA7805 can do it with 2 Si diodes drop to 3.45V
Maybe even 2.5V will do the NF goes up with temperature.
The XVTR with open RX input does self oscillate but is stable with the external SPF5189z
A miracle!  a high gain  preamp that does not oscillate a new experience nice.
The XVTR internal RX preamp is a SPF5043z opamp replacing the NE325 gaSFet that broke.

The SPF5043z is different the current is much lower then what it should be.