and can shift - 28 or + 28 MHz for repeater use.
however the DB6NT design is small band using helical bandfilters
i could not get 2W on all shifts
it should be possible to tune the 28 down 1122Mhz  and 1150 to have full output. 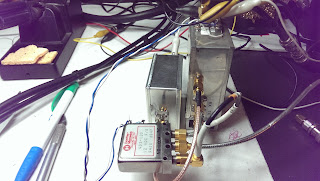