December 20, 2015
West-Beverage in use now some weeks  works real good.
But the east direction was missing. At least switching E-W must be possible .
F.i. 16 December 160m  lots of  JA heard some 599 but deep in the noise on the TX  antenna.
Tried a bi-directional Beverage last year but the result was no success.

So now i set up a 2nd  east Beverage Saturday I need to follow the east west pattern of the ditches avoiding crossing the land strokes s
As long as catle is on the fields only E-W Beverages are possible
I  had 2 wires about 330m long former army field telephone wire  twisted..
Steel wires with CU   core  20 OHm / 330m very strong insulated wire perfect for Beverages .
It was a touch job to untwist a 330m line..
Now i could pull relative easy  the 2nd  wire from the West Beverage to use it for the 2nd East Beverage.  Relative easy...
Most work in the dark it is special setting up Beverages good training too. I walked at least 4 times in both directions. 4x 700m over wet grasland. I imagine how this will be at dx-peditions sites walking in the bush snakes wild animals... But here in the Holland climate we have little dangerous animals in the fields most dangerous animals if any are found in the city's.
We once had a lone Wolf wandering around lost from Germany  never caused problems.
Maybe the global heating will change that..  But the global heating is stopped now by the agreement  in Paris  the temperature will not rise anymore we only have to pay a few 100 billion tax more and
some new crazy unworkable EU rules will be forced upon us and we are safe...

Careful this time still a little muscle strain of my last Beverage action.
For east I have to cross the driveway. Already a cable was under ground  to the other side.
I modified my bi-directional Beverage switch-box so that I could switch between B1 with its 9:1 trafo or the 2nd coax cable to the east Beverage

Both Beverages seem to work tested on some signals  E/W   but
160m / 80m / 10m propagation  radio blackout so have to wait for restore of ionosfeer.

The shack switch box   injects 12V  to the cable   to switch the remote relay.
I used the box that I had from the K9AY.


The  antenna box in the field  switches  between the West and East Beverage.
The west  B is direct connected to the box. The east is connected over a coax cable
It can be any other  50Z type of receive antenna.
The simple circuit took me some trial and error to get it working.
I should have taken  time  for a good circuit drawing first before starting to solder. 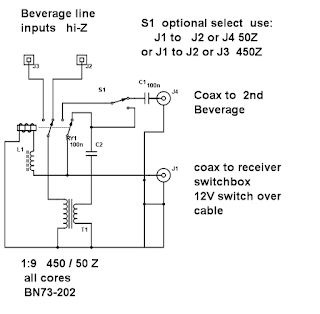 2. reported to problem@N1MM.com
new versions do no mention this issues
N1MM+   overflow rte when re-calculating  score of general big log
no response from N1MM team not sure if  report is received.
- hang-up in general logging / huge logs score calculating give overflow RTE
still using n1mm classic for that reason.
signature:

Before tried  reinstall the Brother software  and re-booted the PC  no cure.
It is  another GUI for the Brother Control-center  but the functions are visible and function again

New this weekend...  scanning a document on the Brother DCP750CW  printer
is no longer possible.   Control center  utility  of Brother can do that I use this for years it always worked fine
as long as the Brother  DCP750CW is in the same WLAN  subnet.

But today sudden the Control center wil not work.
It opens a white field controls are gone .  same on a second PC!
I suspect  Adobe player since l-m button displays a message related with f-p
Is it Adobe flash player with a new update   update 24588532908876627 since this trash player needs updates every 30 minutes ? This Adobe flash player is playing around with your PC. 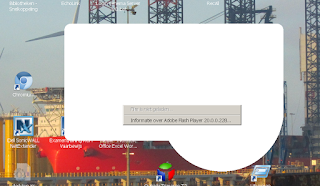 B.t.w.  the DCP750WL can only connect to an open Acces-point.
It failed to a secured WLAN      WEB  or   WPA2 . But okay    i placed a 3rd open WLAN  router just for the Brother.
WLAN  is a very difficult technic.  If it works you are lucky  It can stop working anytime without reason..

4 Solved  fttb  ..    N1MM  suddenly very slow responding again
It worked flawless in CW the last contests.
Now in the Croatian 9ADX   the mouse cursor hanging slow move delay of seconds lost the cursor then.
TX cq did not start but many seconds after pressing enter.
Typing the call or report  nothing happend.  but  5 -10 seconds later just a part of the call filled in.
Total unworkable. Reboot did not bring anything.
Then I disconnected my external HD  1.5T  USB3 and I was back in business!
Keyboard mouse and CW normal quick response no noticeable delay .
For unknown reason the external HD slows down the PC drastically just being plugged in
without known activities running.
No MS-essentials scanner running.
MS system monitor does not show all processes that load your system
It will not report :  Windows  process xx  is delaying your PC ....