August 16, 2013
Back from short last minute on EA6 Mallorca.
We had a very warm July in JO33hg  until last Wednesday it ended drastically changed from 28 to 15C   heavy showers after a  thunderstorm with bad damage and one young girl killed by a fallen tree.
From our local airport it's a 2h20m flight only to get into a tropical world. The contrast couldn't be greater the runway was flooded and 15C in Groningen we had to walk to the plane  a small airport.
Mallorca airport is very big 15 million travellers it looked bigger then Schiphol Amsterdam airport.

From a rainy 15C to 36C   even after  midnight still around 30C  almost to warm for a walk on the beach.
At night on the beach we saw 4 meteoroids 12 August in 1 hour time it was not very dark the light pollution was high but dark  enough to see the milky way.  Not like a shower but the radiant was Perseus. 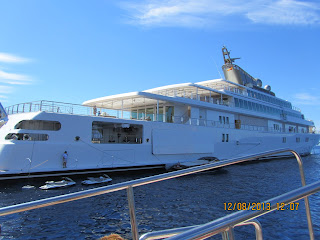 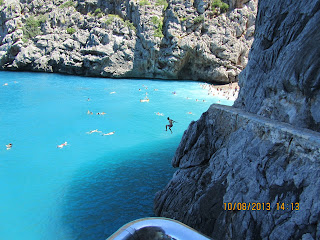 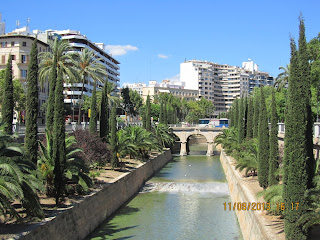 Palma de Mallorca  with some ham antenna at the back 2 and 6m I believe.
I have seen some extreme promising radio locations on the Mallorca.
Some mountains over 1000m asl like puig Major 1400m asl on the west coast.

I brought my Flex1500 but only received EA6GF at 50MHz WSPR
using a wire dipole at the balcony on the 1rst floor not the best location.
2 decodes that is 100% more result then I had in Alexandria this year where I could not receive a single shortwave signal at all!
I did not serious try to get on the air but WSPR was the right mode since I did not want to spend much valuable time in the hotel room.

I needed I-net access to let WSPR run.
The internet access of the Hotel was restricted to 1 device only and I installed it on my HTC  I thought  to use the HTC mobile as WIFI hotspot.
But   that was a mistake. I had used the HTC as hotspot when we had a network breakdown earlier this year to my surprise it worked  easy and good.
UMTS/GPRS  internet was serving as a WIFI hotspot to my laptop  by simply enabling the portable hotspot function of the HTC.

Now I had a different situation the HTC was connected to i-net over its wlan adapter.
How to use this to connect the Laptop was the issue.
One would think that could not be a big thing... But it was tricky for me.
When the mobile hotspot is checked the wlan connection is switched off. It is or /or.
Handicap is the HTC desires small internal memory 3.69 GB total  and available only 30-40 MB .. So only a few APP's can be installed.. not like the advertising may let you think.. Yes you can use many APPS but one at a time only thats what they do'nt  tell you .

I had never done this so first thing was to find a good APP that can do this job
I tried some of them  like Opengarden Smart Wifi   with no result
A restriction is with USB connected the SD memory card was unavailable so i had to unplug it first to download the needed software and then reconnect to install it on the laptop.
Also the programs are not easy to install  consisting of  several drivers clients and  probably very easy for the insider but not for me if you want to set it up quickly.
Some Apps need Android 4 to work  others need  special USB driver.
But how to force another USB driver when already a driver was installed before.
This point was neglected in the instruction. Simply the author was assuming a first install on a new system?  I could not fix this. Simply you end up with an error message like:
USB driver not installed.

Possible it is the setting in HTC for connectivity with PC that has to be disabled as drive.


I got Foxfi to work with blue-tooth linked to the Laptop USB failed using the free version that needs to be reconnected after some time.
My the HTC phone is mostly resisting those installations but this time  It showed some mercy.

PDA net has to be installed

Foxfi does look good.  finally the laptop was online but it was already our last day. And so only 2 decodes of EA6GF a local ham was the result..
The Flex1500 has a special USA DC  connector that has a slight thicker centre pin so the standard DC adapter cables do not fit and Flex-radio does not include a simple DC power adapter with the Flex1500. So this simple 13.6V power thing becomes a real issue.   Also this time I had to be careful not to move the Flex causing the DC power to interrupt I had tested it well at home I could move the plug and every thing  without interrupting the 12V  but  yes again first thing here was a power interruption ...
Very annoying with Power SDR connected a re-boot of the PC is needed.
There is no  USB  error  hotreset possible for what ever reason.

Possible there are alternatives for Foxfi.

In Mallorca  Google did ask me to verify my identity for security reasons since I was on a different location.  I have not seen that before on other trips but it seems a good extra security protection.
But now back home  I got a red top bar  saying:
Google prevented a suspicious attempt to sign in to your account.  Was it you?

I answered that question a few times but the above message is still there.

I had a bad experience once in Barcelona and was robed.  Possible Spain has a high security level for Google. although Mallorca looks safe many tourists  well organised public transport.
Good buses many stops relative cheap. Even an 100 year old train is still serving as attraction.

Possible the conditions for thieves and small criminals are not good on the island they can not hide like in Barcelona and have to live in hotels 95% is tourist here.
By incidence I saw a report on TV about pickpocketing  in Barclona.
I was (not really) surprised to hear that notorious thieves come away with  a relative low money penalty I thought that was only happening in Holland.
But the police force in Barcelona  is like the Village people. It looks impressive to see groups of police parading  in the streets but they seem only busy with them self and chatting while pick-pocketers are spinning around.