July 17, 2015
First GM to 4X  one way     for  me the 2nd  time decoded by 4X1RF
To be correct I was running 40W on 4M
WSPR does not feature to set the power per band.
What a good VHF propagation tool is this WSPR !
Needed a good setup, stable and accurate frequency  drifting < 5Hz /2minutes  and make sure to stay in the 200Hz window.
But that should not be a problem with a modern tranceiver.
And most hams already have a PC connected to use oher digimodes RTTY BPSK FSK441 JT65
etc  so why not running  WSPR ?
Why re-inventing the wheel by building a classical antique beacon  ??
WSPR is the ultimate propagation reporter  tool also for VHF that has been proven in VK and EU


WG2XPN back on the air
Published on 7 February 2015 by Brian WA1ZMS
The Experimental License for WG2XPN with one-way only beacon operations on 70.005 MHz with 3 kW ERPd from here in the US (QTH: FM07FM) has been renewed until May 1st of 2017. As such, it gives the only 4 m North American beacon an chance to be heard via TA in the EU for another 2 years. That’s a good thing in my mind. Thanks again goes to the FCC & the Society of Broadcast Engineers here in the US for their continued support; after all this portion of spectrum is still reserved for TV service only and no US 4m ham band appears possible in the future. I am always hoping for a repeat of the 7000+ km Eskip DX reports that took place in 2013. To all EU stations on 4 m: Remember to point your beams West during Eskip season and give a LONG listen on 70.005 MHz. You might just hear something!

Why is WG2XPN  not using WSPR mode  that wonders me.
WSPR  beacons are continuous monitored and reported automatically
No opening would be unnoticed this way.
Many propagation paths are reported by WSPR that are not noticed otherwise.
F.i. the aurora enhanced greyline openings to VK at 80 and 160m
Now someone has to check 70.005 random by coincidence for WG2XPN 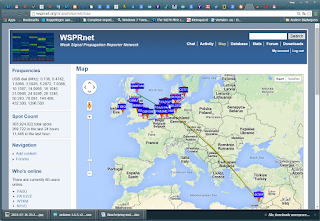